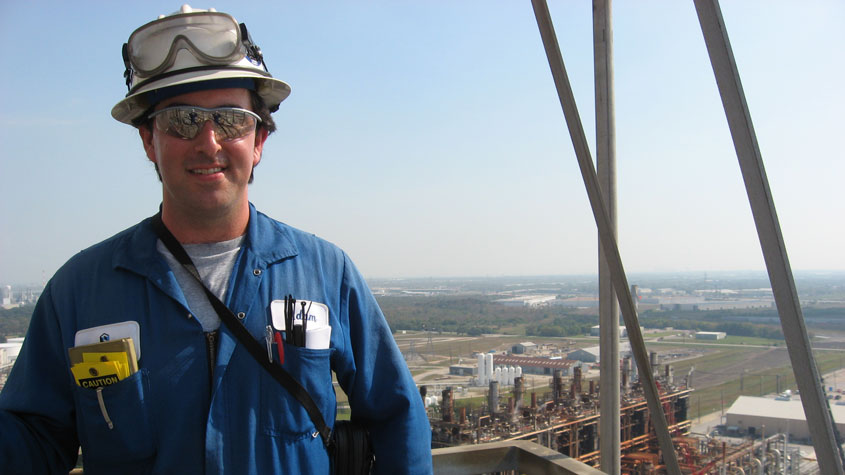 Adam Gottlieb, the new president of Rice Engineering Alumni (REA), likes having a good time as much as anyone.

As an undergraduate, he tended bar at Willy’s Pub (“which has to be the best job on campus”) and played club lacrosse, including one memorable game on the night before Beer Bike that got a little out of hand.

“I think the role of the REA has been changing. We still want to feel the Rice spirit and enjoy ourselves but we’re more than a social club. We’re thinking: What’s the next big capital project we can get involved with?” said Gottlieb, 38, who earned his B.S. in mechanical engineering (MECH) in 2003 and will take office as REA president on July 1.

Four years ago, when MECH students held a meeting to complain about a lack of facilities, Gottlieb had recently joined the REA Board of Directors. The group responded to the complaints by dedicating $30,000 to renovate the department’s Internal Combustion Engine Lab. That gift was part of a larger $50,000 pledge to improve MECH labs over the following three years.

“We were sitting on a surplus and the obvious question we had to answer was: How can we help?” said Gottlieb, who works as the rotating equipment engineer with Celanese Corp., a Fortune 500 petrochemical company based in Pasadena, Texas.

Gottlieb was born on Long Island, N.Y., and moved with his family to Daytona Beach, Fla., when he was 12. “No one else in my family was in the STEM field. I was the kind of kid who played with Legos, sure, but I really didn’t know what I wanted to do, except I knew it would be something technical,” he said.

By the end of his first semester at Rice, Gottlieb had decided to major in MECH. He gives some of the credit to two faculty members: Marcia O’Malley, the Stanley C. Moore Professor of MECH, and David McStravick, professor in the practice.

“Marcie and Dave became my senior project advisers. Both of them were always helpful and encouraging. That’s one of the great things about Rice. You can get close to the faculty. They really care,” Gottlieb said.

His first job after graduation was with Deloitte Consulting, where he worked as a business analyst. There he decided that consulting wasn’t for him, and after little more than a year he moved on to LyondellBasell Industries in LaPorte, where he learned the ropes as a maintenance/reliability engineer.

“I was the point technical person for anything that breaks. I got to work with good old Texas maintenance people who were not engineers and taught me the business from the ground up,” said Gottlieb, who stayed with the company for almost seven years before moving on to Celanese in 2012.

“Now I’m the first line of defense for anything metal or concrete,” he said. “I’ve become a specialist in rotating machinery reliability -- pumps, compressors, turbines -- basically the heart of the plant that keep things flowing in and not leaking out of the pipes. I inspect the machinery we’re planning to install. Every day presents a new set of issues, and it’s never boring.”

As REA president, Gottlieb expects to devote eight to 10 hours a week to the job.

There’s another reason for Gottlieb’s devotion to Rice: he met his future wife there. Katie Beth Higgins, a Georgia native, double majored in sociology and policy studies, went on to earn a master’s in public health and a Juris Doctorate, and now works as general counsel for Planned Parenthood. Their daughter, Eliana, is nine.

“I see my job as REA president as basically helping the students more,” he said. “What’s best for them?”